Kerusso recently had a lil party at our headquarters. While it wasn’t exactly a happy occasion for most of us, it was certainly a reason to celebrate for one particular Kerusso leader: retiring Director of Human Resources Bob Ahart.

Ahart, who is originally from North Little Rock and now resides in Holiday Island, joined Kerusso just under a decade ago following HR leadership positions at Potlatch Lumber in Warren, Arkansas; Kennametal Inc.; Frigidaire; and Arkansas Power & Light, which is now Entergy. He served as an HR manager over benefits and employment/labor relations for AP&L for 25 years.

And while he said he’s by no means eager to leave his Kerusso friends, he is very much looking forward to retirement, traveling more frequently, spending more time with his lovely “bride” Paula (he still proudly calls her that, after almost 48 years), and getting closer to his three grandchildren, who live in Central Arkansas. And, no doubt, making his garden even more gorgeous, though he’s already topped that peak: he and Paula won Garden of the Year in 2013.

(He did tell his wife there is one thing he is looking forward to leaving behind: the 5:40 a.m. alarm on work days.)

Ahart is known among his Kerusso friends and family as a jokester with a fantastic sense of humor; he also developed a reputation for generosity and compassion, having helped those in bad times with unexpected and behind-the-scenes cash assistance, for example, several coworkers noted. He never sought any special thanks or attention, yet he always went above and beyond, in every way.

"Work willingly at whatever you do, as though you were working for the Lord rather than for people. Remember that the Lord will give you an inheritance as your reward, and that the Master you are serving is Christ."

Ahart is additionally revered and much-loved for his wise counsel, calm composure, and commitment to spreading the Good News of salvation through Jesus Christ.

It’s a message he’s been committed to his entire life. A graduate of Hendrix College in Conway, Ahart taught Sunday School for 30 years, and has long served as a worship leader and singer in his church.

Ahart served in the U.S. Army during the Vietnam War. He’s the “baby” of 9 children: he has 7 brothers and 1 sister. At his parents’ 50th wedding anniversary gathering, his father, a gifted writer, shared some stories he’d penned about raising 9 kiddos. For the first time, Bob learned that his parents had secretly hoped he would be a girl – they loved him so much he never had a clue.

At age 6, Ahart was pronounced dead on an operating table. His mother, Etna – who is about to turn 102 and is still a beauty – refused to accept the doctors’ news; she demanded that they go back into surgery and revive him. And they did; apparently, he’d been overdosed with ether!

Her son grew into just as determined and feisty a person as his mother. That persistent and lively spirit, combined with his sense of humor, has resulted in some pretty remarkable situations. Once, during his 30s, while attending a Dallas Cowboys’ scrimmage with family who worked for Cowboys owner Jerry Jones, Ahart was standing along the sidelines when an errant ball bounced toward him. Instinctively, the huge Cowboys fan stretched his arms to grab the ball and then stretched out his legs (running toward the end zone) to grab the extra points, too! (He said he got some stern looks from staff, but it remains a favorite memory of his, so no regrets.) Go Bob, go! 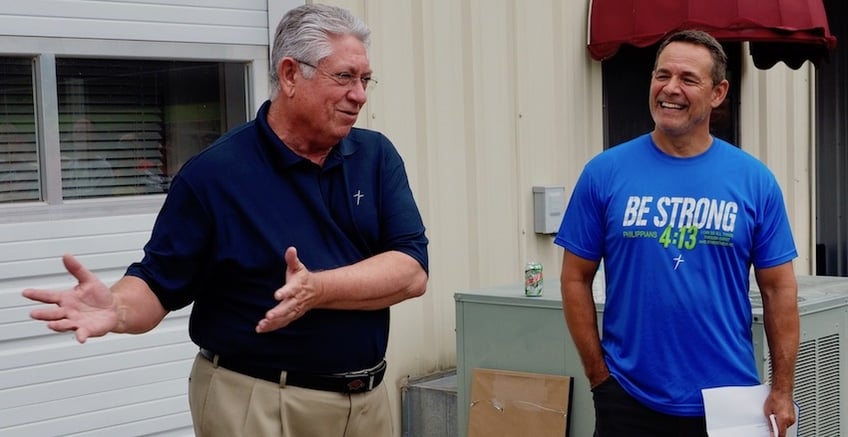 He’s probably an even bigger fan of the Arkansas Razorbacks; his retirement gift from the Kerusso team included season football tickets for this fall; the look on his face at his send-off gathering when he learned of the tickets was absolutely priceless!

More recently, Jokester Bob emerged in full force while he and Paula were visiting the historic 1886 Crescent Hotel in Eureka Springs, Arkansas, near Kerusso’s headquarters. The Crescent has been the setting for many amazing stories over the course of its long history, but the most-repeated are probably those of guests relaying tales of ghost encounters; the hotel’s “haunted” reputation has earned it appearances on numerous TV shows and tourism publication lists of interesting places to visit. While walking through the historic halls of the hotel, his wife relayed, Ahart thought it would be funny to jump out from around a dark corner disguised as a “ghost” with the help of a bedsheet. He asked a lady to take some pictures, then they went downstairs and showed them to different people, Paula told friends at Kerusso. “People were oohing and ahhing, and asking for a copy of the picture! It was amazing how gullible folks were – ha ha!”

Ahart said his favorite things about working at Kerusso have been the company’s mission of proclaiming the Good News of Jesus Christ, and the fact that there are “no personal agendas among management, which is rare in companies today.”

He and Paula actually met through their mutual singing talents and love for music; she was singing in a trio at a statewide church music convention, he in a quartet in the same service.

“And they’ve been singing in harmony ever since,” Kerusso Founder and CEO Vic Kennett said at the cupcake-party recently where employees gathered to thank Ahart for his service and bid him best wishes.

On a serious note, he added: “From day one, Ahart has ‘proclaimed the Good News’ both inside and outside of Kerusso.”

“A good man out of the good treasure of his heart bringeth forth that which is good” (Luke 6:45), reads the large framed collage that Kennett awarded Ahart on behalf of Team Kerusso.

And above the beautiful array of photos from over the years (many of which show Ahart having fun on the job and spreading smiles all around), Kennett wrote: “To Bob: Teammate, coach, teacher, counselor, friend. Your dedication, service, and love will not be forgotten!”

“It is difficult to put into words my appreciation for our time together,” Ahart said to the Kerusso teammates gathered on his final day of work. “You are an awesome team, and I know God will continue to bless your efforts as together you proclaim the Good News. Thank you for the Razorback tickets. I will remember you as I CALL THOSE HOGS!

“May each of you be blessed, for you have been a special blessing to me and my entire family. Thank you, Vic, for your creative leadership and devotion to His mission!”

"In everything set them an example by doing what is good. In your teaching show integrity, seriousness and soundness of speech that cannot be condemned...

We, Bob, thank you, for showing us a true Godly example of doing what is good. We love you dearly and are grateful we got to know you and work beside you! God bless you, friend! Now — go enjoy your retirement, or, as some may consider it, your many coming consecutive days of rest!

We’d love to hear from you! Want to tell us which Kerusso tee or hat inspires you, or share a personal story of T-shirt evangelism in action? Send us a note.

How Much Prayer Is Enough? [5 Easy Steps to Improve Your Prayer Life]