The Friday before Easter has been recognized as holy since as far back as AD 230; about that time, a Christian document known as the Didascalia Apostolorum described activities to be undertaken during Holy Week, including a fast on Friday. A bit of detective work turns up various references from early Greek, German, and Danish texts that may shed further light on the history of the name Good Friday. 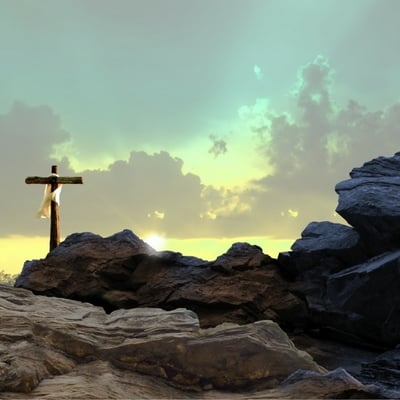 This kind of minutiae is the stuff the dreams of history buffs are made of – but for the rest of us, poring over dusty manuscripts doesn’t replace the simple act of opening our Bibles to the greatest story ever told: the birth, life, death, and resurrection of Jesus Christ.

Good Friday is the day we recognize that every blessing – including salvation and the eternity we will spend beyond this earthly existence – was purchased by the blood of Jesus of Nazareth, the son of God. There is no gift so rare, so sacrificial in nature, so abiding and filled with love, as the gift of God’s own son in payment for our sins.

Jesus was born of man, lived a sinless life and was crucified on a cross so we might have everlasting life. There is no word sufficient to the task of naming this kind of love, or a sacrifice of this magnitude. And so, being human, we call the day we recognize Jesus’ sacrificial act of love ... good. (To be fair, the first modern thesaurus wasn’t released to the public until April 1852.)

This Easter season, take the time to read the story of Jesus’ crucifixion and death on the cross. Talk to the children in your life about the meaning of Easter, and what it means to be redeemed by God through the blood of Jesus. Pray, thanking God for the gift of his son Jesus and for the grace and hope we receive through His redeeming love.

Details of the death and resurrection of Jesus are described in the following Gospel passages:

32-37: As they were going out, they met a man from Cyrene, named Simon, and they forced him to carry the cross. They came to a place called Golgotha (which means “the place of the skull”). There they offered Jesus wine to drink, mixed with gall; but after tasting it, he refused to drink it. When they had crucified him, they divided up his clothes by casting lots. And sitting down, they kept watch over him there. Above his head, they placed the written charge against him: this is Jesus, the king of the Jews.

38-44: Two rebels were crucified with him, one on his right and one on his left. Those who passed by hurled insults at him, shaking their heads and saying, “You who are going to destroy the temple and build it in three days, save yourself! Come down from the cross, if you are the Son of God!” In the same way, the chief priests, the teachers of the law and the elders mocked him. “He saved others,” they said, “but he can’t save himself! He’s the king of Israel! Let him come down now from the cross, and we will believe in him. He trusts in God. Let God rescue him now if He wants him, for he said, ‘I am the Son of God.’” In the same way, the rebels who were crucified with him also heaped insults on him.

The Death of Jesus

When some of those standing there heard this, they said, “He’s calling Elijah.” Immediately one of them ran and got a sponge. He filled it with wine vinegar, put it on a staff, and offered it to Jesus to drink. The rest said, “Now leave him alone. Let’s see if Elijah comes to save him.”

And when Jesus had cried out again in a loud voice, he gave up his spirit. At that moment the curtain of the temple was torn in two from top to bottom. The earth shook, the rocks split and the tombs broke open. The bodies of many holy people who had died were raised to life. They came out of the tombs after Jesus’ resurrection and went into the holy city and appeared to many people.

When the centurion and those with him who were guarding Jesus saw the earthquake and all that had happened, they were terrified, and exclaimed, “Surely he was the Son of God!” Many women were there, watching from a distance. They had followed Jesus from Galilee to care for his needs. Among them were Mary Magdalene, Mary the mother of James and Joseph, and the mother of Zebedee’s sons.

Thankfully, this story doesn’t end here. On Easter Sunday, we’ll continue the story in our next blog post by sharing the great news of Jesus’ resurrection! Won’t you join us, and share this with your friends in case they have never heard the whole story? You may also leave a comment below and share it to Facebook all at once, or subscribe here to weekly blog email updates!

Until then, if we may pray with you about anything, please let us know here.

Let Us Not Grow Weary

Jesus Has Risen! Now What?