It’s All About Helping Our Veterans

A lot of people have good intentions to do good things.

A few people even reach that goal.

The Webb City, Missouri, resident and his family have been involved in helping vets as a ministry since August 2006. Kerusso is supporting their latest project, and we wanted to share it with you.

The Lodge of Hope is part of the efforts of Peterson Outdoors Ministries, giving veterans a place to heal emotionally and find peace while fishing, hunting, and fellowshipping with friends around the campfire.

“It’s such a good project to be part of,” says Kerusso founder and CEO Vic Kennett. “The work that Tron and his team are doing on behalf of veterans is inspiring and something we wanted to be part of during their fund-raising phase.”

For ten years, the ministry has assisted veterans without a facility.

Peterson outlined the long-range plan to provide a haven for those who have protected us with their lives and left part of themselves on the battlefield. That includes psychological injuries, too. The capital campaign involves eleven area churches and three local partners: Kerusso, Arvest Bank, and Schuber Mitchell Homes.

In fact, Schuber Mitchell has sent out crews to help with building.

Phase 1 is almost put to bed. It included construction of the lodge at the edge of a lake. Now the groups can have indoor activities along with the full complement of outdoor activities.

Phase 2 is well underway and includes acquiring thirty-six surrounding acres, including a barn and a guesthouse.

Peterson understands the special needs of the veterans, so a special construction project is also planned to provide cabins for couples.

“It will allow us to put one or two log cabins on the property—contractors are ready to build those. We’ll have military families stay there, especially if they aren’t able to be around other groups in the lodge.” A pavilion and firepits will complete the look.

“We need $175,000 raised in the next year for Phase 2,” says Peterson. “We are having a fund-raiser on August 18, 2018. On that day, we’ll be sharing the vision of the ministry, dedicating the facility, and having state dignitaries and vets speak. Tours will be given by boat on the lake. We’ll have a silent auction and, at 6 p.m. that evening, a banquet.”

The ministry is offering table sponsorships at $500 per table. Sponsor banners are available for $250. “It’s a way to help with our costs and for those who are helping and supporting us to advertise,” says Peterson.

Peterson’s own awakening into the struggles of those with disabilities led to the role he’s in now.

“I had experience with ministry vocation; I’d been a campus minister at Missouri Southern University for four years and then worked for a Christian publishing company until 2009. After that I went into full-time ministry. The first four years it was funded straight out of our pocket, using most of our income, to make a commitment that vets who needed some recreational therapy would get to go on hunting trips. God’s always provided.

“I had a brother struggling with Lyme Disease, facing disability. And we have a lot of veterans in our family. A pastor buddy—probably one of the most solid Christians I knew—gave up on his faith during his second tour. There is a big need here if that can happen….

“I felt that there had to be something I could do, so I prayed about it. I remembered a story I had discussed once with another pastor, about when God was talking with Moses and Moses had a staff in his hand. God used what was in Moses’s hand to accomplish a purpose.

“I had things in my hands—the outdoors...a four-generation family farm.... We’d get in touch with some injured vets and those suffering from PTSD (some were pretty severely injured) and invite them to go hunting and fishing, using adapted equipment to bridge the gap for their disabilities.”

That was the beginning of an amazing unfolding of a place of refuge for those who have been devastated physically and emotionally. 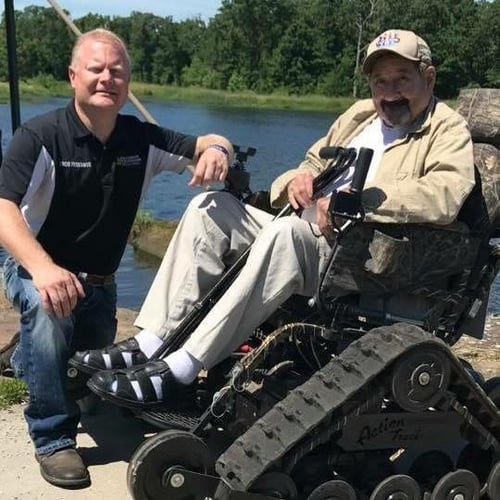 “We have some pretty cool God stories,” Peterson shares. “When we started, I didn’t have knowledge of video cameras, but I prayed that God would show me how to get a video camera and use it to record hunts and the testimonies of the veterans we were taking hunting. Word spread, and they were coming back in big numbers. They had begun to think, ‘I’ll never be able to do that again,’ so we started providing them with videos of vets hunting and fishing. We didn’t have any money for video cameras, but friends bought one for us; they loved what we were doing and wanted to help.”

Over time, the ministry became a “veteran” of sorts, coordinating these life-changing events.

“In 2009, we did our first big combat-injured veterans hunt. A lot of volunteers showed up and churches were getting involved. Land owners and local farmers knew this was a good thing. The Missouri Department of Conservation even loaned out hunting blinds.”

The enormous help was much appreciated, of course, but Peterson knows the ultimate Source.

“We give all the glory to God.”

Over time, this has grown into quite a tight-knit community, with more added every year.

“We’ve had over two hundred combat veterans plus family members, and maybe six hundred vets and family come through our program directly.”

And the whole endeavor is a faith-based program. Each day starts with teaming up a Christian videographer and a vet through the whole four-day retreat.

The blending of mindfulness of veterans’ injuries—adapting equipment to help them—and spiritual nourishment has had a dramatic impact. Morning devotions precede hunting and fishing trips, and then a banquet follows each night. A pastor concludes by giving a message of hope and inspiration. The result has been 175 decisions for Christ!

“This experience has prevented about two or three dozen suicides,” Peterson emphasizes. “They said this was their last hope. But we know it wasn’t us; it was the Lord."

And it doesn’t end when the retreat is up. The team ministers before, during, and after the events. About fifty members pray after receiving a vet’s name, and they spend weeks praying for that person. Letters are written and they are given a prayer partner, who writes a letter that is given to the vet.

With a long reach, the ministry isn’t confined to one location. Events are held in Missouri, Kansas, Arkansas, Oklahoma, Tennessee, and even Canada. A group trip is being planned for Africa.

Once an event concludes, the next step begins.

“Afterward, we have a follow-up program to get them connected with an area church, and we let the church know about the vet and family. The guides and cameramen and a prayer-team person follow up. The vets are sent birthday and anniversary cards.

“Everywhere we go, the program is replicated: morning Bible study and evening study and preaching.

“In the future, we want to use Lodge of Hope as God wants us to use it. We’ve helped pastors, veterans, and military chaplains, and now we want to do marriage retreats, to strengthen military and pastoral marriages. We want to build up those who build up the kingdom.”

Indeed, Lodge of Hope is a place of solitude and relaxation and restoration.

Because the events are free to the vets, Peterson gratefully acknowledges the various people who help with dozens of tasks.

“Without our partners, we can’t do what we do. We have a very large volunteer base; they are what makes it run.”

Kerusso is proud to partner with Lodge of Hope. Perhaps you can prayerfully consider being part of this ministry as well.