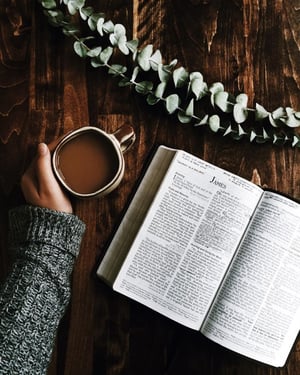 The opinions of scholars differ over when the many pieces of the Bible were recorded throughout its creation. Regardless, the Creator of the Universe would provide His creation (us) with the information needed to understand how we got here, why we’re here, and where we’re going, through His word.

It is clear that Man was able to write very early. Job mentions writing (Job 19:23,24), both with a scroll and ink, and using a stone or soft clay and a metal stylus. Until the mid-19th century, it was popular among scholars to believe writing wasn’t invented until only a few thousand years ago. However, archaeological excavations in Mesopotamia (modern Syria and Iraq) revealed that people were writing during the time of Moses, or the second millennium B.C.

In the early 20th century, a British officer named P.J. Wiseman, during his postings in the Middle East, discovered that clay tablets unearthed in ancient cities used a “colophon” method of recording histories, with the names of the recorders repeated in the same place. Eleven verses in the book of Genesis use this method—evidence that the earliest records in the Bible were written down at or near the time they occurred.

It is believed that Moses was the compiler, or “editor,” of the first five books of the Bible, known in the Hebrew tradition as the Torah. Fifteen-hundred years or so after Moses compiled the Torah, the rest of what we recognize as the Bible was finished.

By the second century, copies of Bibles were available.

The problem was, at that time, collected writings were rare. Scribes hand-copied each letter of each line of each page. The average person did not have access to books, as they were so expensive to produce. Most books at this time were owned by scholars and church officials.

This period of history is generally known as the Dark Ages, as Europe was primarily enveloped in warfare, disease, and lack of education.

All that changed in the 15th century, in a real turning point for history.

The Gutenberg Bible, printed in 1455 by Johannes Gutenberg, a German, was the first mass-produced book using a moveable-metal-type-printing press. Even though the book had reached iconic status (surviving copies are worth as much as $30 million!), only about 200 were printed.

Still, this moment paved the way for Bibles and other books to be mass produced within a couple centuries, and because of this, the populace could become more educated, and more importantly, could read the Scriptures.

Today, more than 100 million Bibles are printed and distributed each year.

Unquestionably, the Bible has had more impact, on more people, than any other book in history, by far.

According to a survey by the Bible Society, 2.5 billion Bibles were printed between 1815 and 1976, and current estimates are approaching a staggering five billion.

The Bible has changed civilization for the better. When one thinks of the work of Charles Wesley and John Wesley to eradicate poverty in Europe, and the power of Billy Graham’s preaching of the gospel all over the world, there is little doubt that these efforts, among many thousands of others, have contributed to the betterment of the world. Christianity has produced hospitals, schools, and relief efforts worldwide for centuries, all inspired by the Word.

The Bible, of course, claims to be of divine origin, and there are scores of internal evidences to support this claim. For example, in Jeremiah 36, we read that the Lord spoke to Jeremiah the prophet, who then dictated the message onto a scroll. Eventually, word reached King Jehoiakim, who did not like God’s words of judgment. He had the scroll cut up with a knife and thrown into a fire.

Such things, though, do not deter the Lord of the Universe.

Again, the Lord spoke to Jeremiah: After the king burned the scroll containing the words that Baruch had written at Jeremiah’s dictation, the word of the Lord came to Jeremiah: 28 “Take another scroll and write on it all the words that were on the first scroll, which Jehoiakim king of Judah burned up.” (Jeremiah 36:27,28).

Through history, men have tried to get rid of the Bible, but none have ever succeeded.

More evidence of the Bible’s divine origin—that it is the very Word of God—is found in the book of Isaiah.

Did you know that the first 39 chapters of this 66-chapter book are devoted to God’s wrath and judgment? The final 27 chapters are devoted to His goodness and mercy, with an eye toward eternal glory in the New Heavens and the New Earth.

Throughout the Bible, too, we see an unbroken thread that is Jesus Christ.  The overall book ends with the Revelation of Jesus Christ, as He ushers in a blissful eternity for those who love Him.

There are so many miraculous connections like this in the Bible, that any person would have to suspect that it comes from a supernatural Source.

The Bible tells us that one day, every knee will bow and every tongue will confess that Jesus Christ is Lord. Until that time, even adherents of other religions (sometimes people with no religion at all!) pay homage to Scripture. Consider the words of the famous Hindu practitioner of non-violent protest, Mahatma Gandhi:

“You Christians look after a document containing enough dynamite to blow all civilization to pieces, turn the world upside down and bring peace to a battle-torn planet. But you treat it as though it is nothing more than a piece of literature.”

This is a remarkable admission!

Among Christians, though, it has been recognized throughout history that the Bible has a divine purpose. The famed evangelist D.L. Moody knew this:

“The Bible was not given for our information but for our transformation.”

From the transformed lives of billions, to its astonishing predictive prophecy, the Bible has indeed changed the world forever. 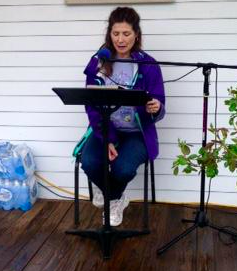 The Bible is continuing to transform lives today! In conjunction with the National Day of Prayer in May, National Bible Reading Marathons take place around the country, with the main event taking place on the steps of our Nations capitol. Continuously, the Bible is read by a parade of people until the entire Bible is completed aloud. Here is Kerusso's very own, Deborah Spate, participating in a Bible reading marathon near Kerusso's home base, in Eureka Springs, AR.